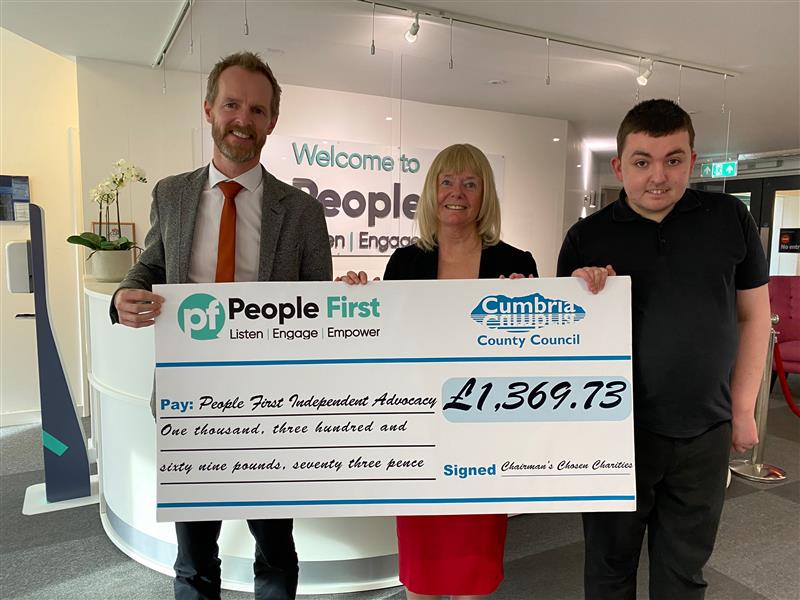 People First recently welcomed the former chair of Cumbria County Council, Councillor Christine Bowditch to the People First Conference Centre. The visit, was a celebration of the support Cllr Bowdith has given to People First and our customers since selecting us as a chosen charity of the year.

As the Chair of Cumbria County Council, Cllr Bowditch has helped us by raising funds including dare-defying challenges such as 2019’s ‘Fab-seil’, helping to raise awareness of our work within the local media and cutting the ribbon as we opened our on-site restaurant, The Riverbank Kitchen.

“I want to say a big thank you to everyone who showed support, fundraised, donated, and raised awareness of these charities during my two years as Chair. I remain blown away by your generosity and know first-hand how appreciated and beneficial this money will be to them, particularly after a difficult few years.”

Christine’s passion for supporting people with learning difficulties has been a true honour to experience and something our team were delighted to celebrate. Learners at our Hospitality Academy prepared and hosted a delicious lunch to celebrate Cllr Bowditch’s support together. 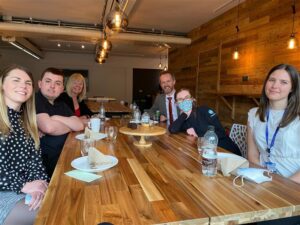 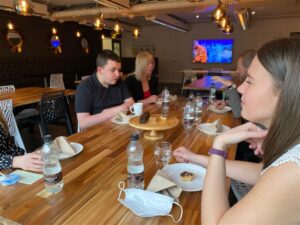 Cllr Bowdith went on to say:

“I am delighted that I have finally been able to present my chosen charities with the money raised during my time as Chair. It was a privilege to be in a position to raise money for two incredible charities which as a parent of a child with severe learning disabilities on the autism spectrum are very close to the hearts of me and my family.”

The donation made to us by Cllr Bowditch will directly support us to continue helping local people with learning difficulties to live their lives however they want to.

So much of our work is made possible through the support of fundraising, grants and awards. We are truly grateful for the support we receive and proud of the impact that is has on local people.

Thank you, Christine, for your support.

This website uses cookies to improve your experience while you navigate through the website. Out of these, the cookies that are categorized as necessary are stored on your browser as they are essential for the working of basic functionalities of the website. We also use third-party cookies that help us analyze and understand how you use this website. These cookies will be stored in your browser only with your consent. You also have the option to opt-out of these cookies. But opting out of some of these cookies may affect your browsing experience.
Necessary Always Enabled
Necessary cookies are absolutely essential for the website to function properly. These cookies ensure basic functionalities and security features of the website, anonymously.
Functional
Functional cookies help to perform certain functionalities like sharing the content of the website on social media platforms, collect feedbacks, and other third-party features.
Performance
Performance cookies are used to understand and analyze the key performance indexes of the website which helps in delivering a better user experience for the visitors.
Analytics
Analytical cookies are used to understand how visitors interact with the website. These cookies help provide information on metrics the number of visitors, bounce rate, traffic source, etc.
Advertisement
Advertisement cookies are used to provide visitors with relevant ads and marketing campaigns. These cookies track visitors across websites and collect information to provide customized ads.
Others
Other uncategorized cookies are those that are being analyzed and have not been classified into a category as yet.
SAVE & ACCEPT