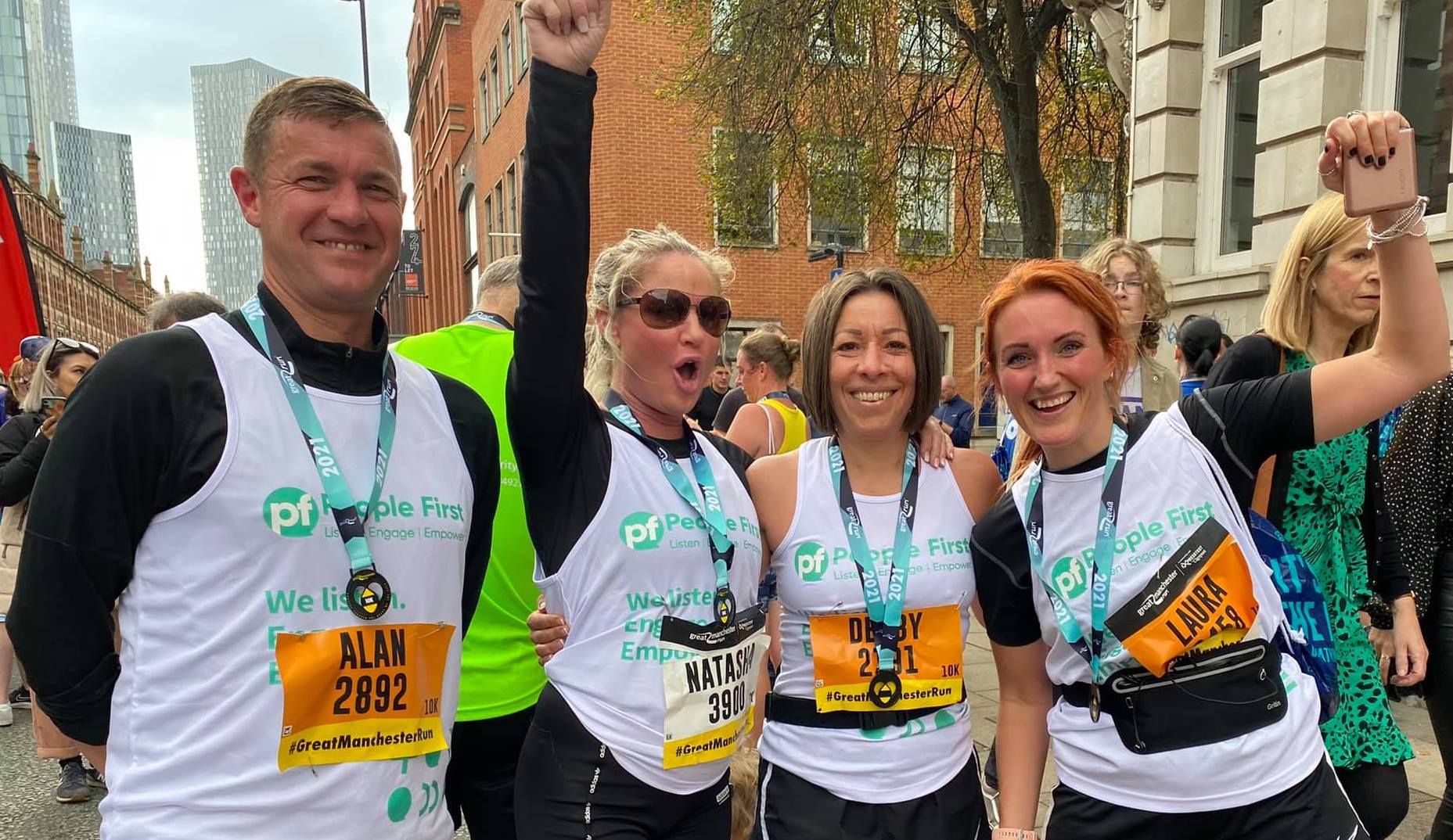 For the first time since becoming a charity in 2019, People First has been represented in a charity run.

Four Cumbrians have taken up the challenge of running the Great Manchester 10K to raise money for People First’s Hospitality Academy and we are hugely grateful.

Our runners – affectionately known as the People First ‘Sprint Squad’ – took to Manchester in September to raise funds and awareness to support our work. The ‘Sprint Squad’ was made up of four local people who had volunteered to be part of the event: Alan, Natasha, Debby and Laura.

After a lot of training, a lot of hard work and a lot of fundraising, The People First Run Team met in Manchester on Sunday the 26th of September. Feeling the energy in the air of thousands of runners, music and excitement, the ‘Sprint Squad’ assembled at the start line ready for a great run. And…

They nailed it. Each of our runners completed the 10K race, bagging impressive times and we even had a personal best.

As a newly registered charity, we are grateful and proud that local people have chosen to support us in this way. Putting in remarkable effort and remarkable commitment, our runners have been a credit to us and our customers.

Together, the runners raised over £1000 for our Hospitality Academy. The Hospitality Academy provides life-changing opportunities for young people with learning difficulties in Cumbria. Based at The People First Conference Centre, learners work together with hospitality professionals to gain the skills they need to become work ready.

Once again, we’d like to say a big thank you to the runners for supporting us.

If you’re looking to find out more about the runners, or you’d like to support their campaign, visit this link.

Here’s to our next run!

This website uses cookies to improve your experience while you navigate through the website. Out of these, the cookies that are categorized as necessary are stored on your browser as they are essential for the working of basic functionalities of the website. We also use third-party cookies that help us analyze and understand how you use this website. These cookies will be stored in your browser only with your consent. You also have the option to opt-out of these cookies. But opting out of some of these cookies may affect your browsing experience.
Necessary Always Enabled

Performance cookies are used to understand and analyze the key performance indexes of the website which helps in delivering a better user experience for the visitors.

Analytical cookies are used to understand how visitors interact with the website. These cookies help provide information on metrics the number of visitors, bounce rate, traffic source, etc.

Advertisement cookies are used to provide visitors with relevant ads and marketing campaigns. These cookies track visitors across websites and collect information to provide customized ads.

Other uncategorized cookies are those that are being analyzed and have not been classified into a category as yet.